I am having a weird time with my body at the moment — I mean, I have been, the weirdness just goes on and on. After a year of staying very very still because my un-medicated undiagnosed POTS made it seem and feel like I had chronic fatigue, I am medicated now, and I can move again as long as I am careful with myself. I actually just finished a breathing rehabilitation programme because I’m on beta blockers now. It was a funny time. Imagine not going outside for months and months, and then suddenly being in a church hall for group exercise where you’re the youngest patient in the room by a generation. There were nurses and physios there taking our vitals the whole time. The old man opposite me wore a full on suit with braces every week. The man next to me used to be a dentist, and now he does art classes every Wednesday. We were all there because we had our own breathing problems, and doing slow guided exercises in a room with professionals meant if something went wrong, we could be saved.

I was so cautious about going. The room was boiling hot, the music was insane, and again, being the youngest person in the room — and the only one wearing gym clothes lmao — made me feel uncomfortable too. But my Long Covid doctor, who had realised I had POTS after a year in the dark, advised me to get super strong legs so that my muscles could help with my circulation. Most of the pain I’ve been struggling with has been in my legs, actually. I didn’t know what it was for so long, tried a billion painkillers, but now with the POTS diagnosis I know it is venous pooling and too much adrenaline spiking my legs. Gotta do leg day. Gotta get superman legs. This felt like a welcome invitation as well — I was missing exercise so much. I miss running. I miss doing Kung Fu. I can’t do those things now because I need to be careful with my heart rate on this medication, but I can try to do leg day in slow motion so I keep my heart in check. (Once I’m out of breath, it’s really hard for me to get it under control between POTS and whatever it is Covid has done to my lungs).

When the rehab programme ended, I did two things: I downloaded a pedometer app that allows for widgets, and I ordered small hand weights. 2x 1.5kg and 2x 3kg. I can tell you know that 3 feels like 5 used to, and 1.5 is hard enough. Every other day, I’ve been trying to do lunges in my garden. I’ve also added horse stance and lady (curtsey) squats into my little routine because of all that missing Kung Fu stuff. I’ve set the pedometer goal to 3000 steps a day. 3000 takes me about half an hour because I’m slow now. Some days I can’t do 500. I’m just playing it by ear, trying to enjoy myself when I can get on with it, and not feeling guilty about not being able to do as much as I used to. Anything feels like a rush when you’ve spent that long in bed. When I’m walking my face goes bright red now, and that never used to happen. It’s also easier if I do the walks on my own so my breathing isn’t competing with my need to talk.

It’s nice going outside again. I crashed on Wednesday night and fell asleep about 10. I woke up at 5.30am the next day and I felt lighter than usual. It was sunny outside but it wasn’t hot — not yet. Heat is the biggest aggravator of POTS symptoms, and I’ve been dreading summer since I figured out what the problem was and read more about managing it. I decided to do my walk before the sun got loud, and this time I walked a new route up to a big field where I used to walk a friend’s dogs for her. I went slowly, listening to an episode of Heavyweight. My back was dripping with sweat even though I was just waking but it was fine. It was good. I loved that I was doing this. No one was around and the roads were empty. I was wearing a pink dress with Jigglypuff stitched on it, bare legs, white pumps with pink soles. I walked and walked. By the time I got to 3000 steps, I was at the top of a big hill. The grass had recently been cut. I found a bench to rest on. Some dog walkers were starting to appear now, but not many, and I saw a man walking quickly around the edge of the field. I wondered if I would ever be able to walk fast again — or run. I rested for long enough that I saw he was doing laps. When my podcast ended, I put on a Phoebe Bridgers album and carried on.

When I got to the next bench, it was covered with what looked like three Tesco meal deals of rubbish and some ciggies. I found the bag they’d come from and I picked up all the litter. It took me a while. The letters in POTS stand for Postural Orthostatic Tachychardia Syndrome; ie. things happen to my heart when my posture changes. Going up and down to pick up the cans and crisp packets didn’t feel physically good but I couldn’t help myself. I have been so useless for so long and I thought if I did this now, at least it would save someone else a job. It would also make the field look nicer. This was the only part of it that was a mess. And anyway, I was bending down to get an ice cream wrapper off the floor and when I looked up, there was a huge white Samoyed stood in front of me. I still had my headphones on so I hadn’t heard it come over. Its owner was about two hundred metres away, so the whole moment just felt a bit magic. I felt really human for a second? I don’t know how else to put it. It was sunny, fresh, I’d made the field clean, and suddenly — and softly — a dog had appeared out of nowhere and it was kind of smiling at me.

I walked home. Bright red face, back dripping, roads still empty. When I got in, I took my dress off and sat in my underwear cooling down for an hour before I moved again. I had done 6000 steps, and even though I could feel the conflict in my body, I was so happy with the world just then. 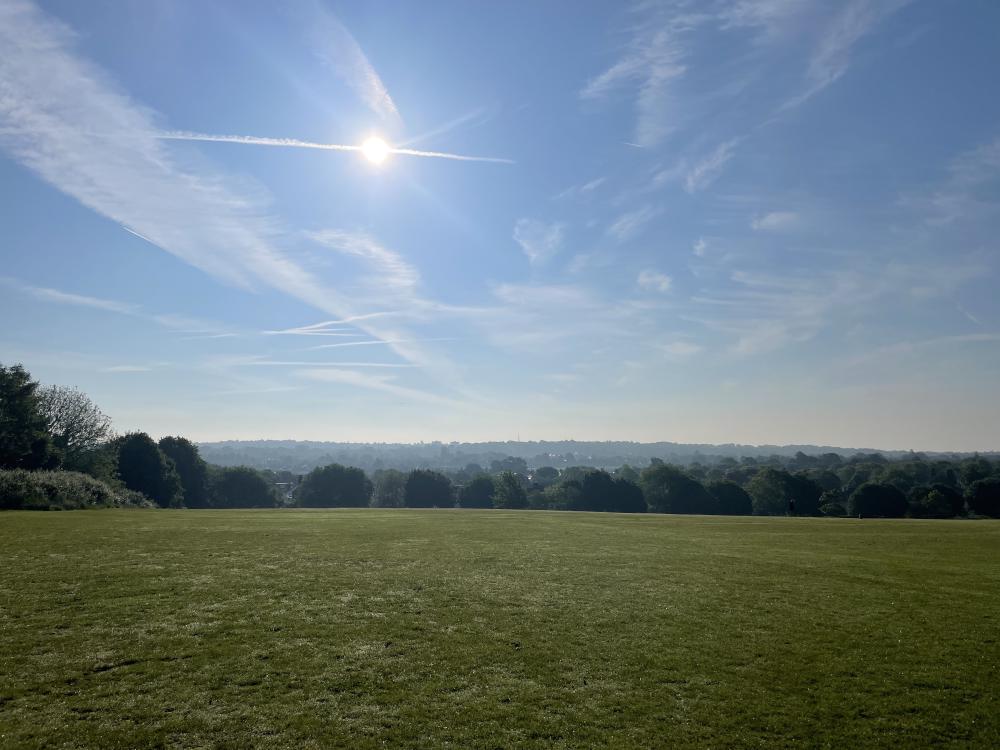