in 1975, georges perec published a short book called ‘an attempt at exhausting a place in paris.’ it’s an account of things he saw out in the world that people wouldn’t normally comment upon or really value. he wrote about the happenings in between the big important things and places, making these details newly important in text. in 2017, michael crowe published ‘an attempt at exhausting a place in GTA online.’ it’s the same again, except michael sits on a bench in the game and sees what he can see. palm trees, puddles, taxis, other people and other players. there is violence, eavesdropping, and silence.

In the introduction to the book, editor Jamie Sutcliffe talks about being jealous that Michael got here first - - and same. You can read the full essay from Jamie here. I haven’t even played GTA online or GTAV for that matter, but Michael’s approach, this methodology, is so comfortable. It’s so readable. And as a writer myself, I think about how the content is all there, and it’s just a case of the writer doing some long, sensitive observation, and making sense of the order and delivery. I don’t mean that that’s an easy thing. It just sounds fun, because it’s a case of editing and editing is great. Plus it’s only a small book, like perec’s was, and that’s all it needs to be.

I enjoyed it a lot but I valued it in this other more specific way. I think I’m at an impasse with my own writing, and I’ve been needing to read other approaches to writing about games to refill my tank. I’ve had this on the shelf for a while, kindly sent by the editor, and I’m glad I read it now. For me, I don’t think I want to write game reviews in the traditional sense. Too clinical. I want to write about a game from another angle. My Red Dead Redemption 2 text from last summer is the closest I got to doing what I want to do… similarly writing from pure, imagined immanence like I exist inside the game. Sort of fan-fiction but not far enough with the fiction, I like the balance I landed on because I like that so much can be said implicity by speaking through fiction and description alone. But I also don’t want to repeat that over and over again, so I don’t know where I go next. And so, I’m reading while I figure it out, and this work is exactly what I needed to carry on thinking.

Take a look at a page below and pick up a copy here: http://studio-operative.co.uk 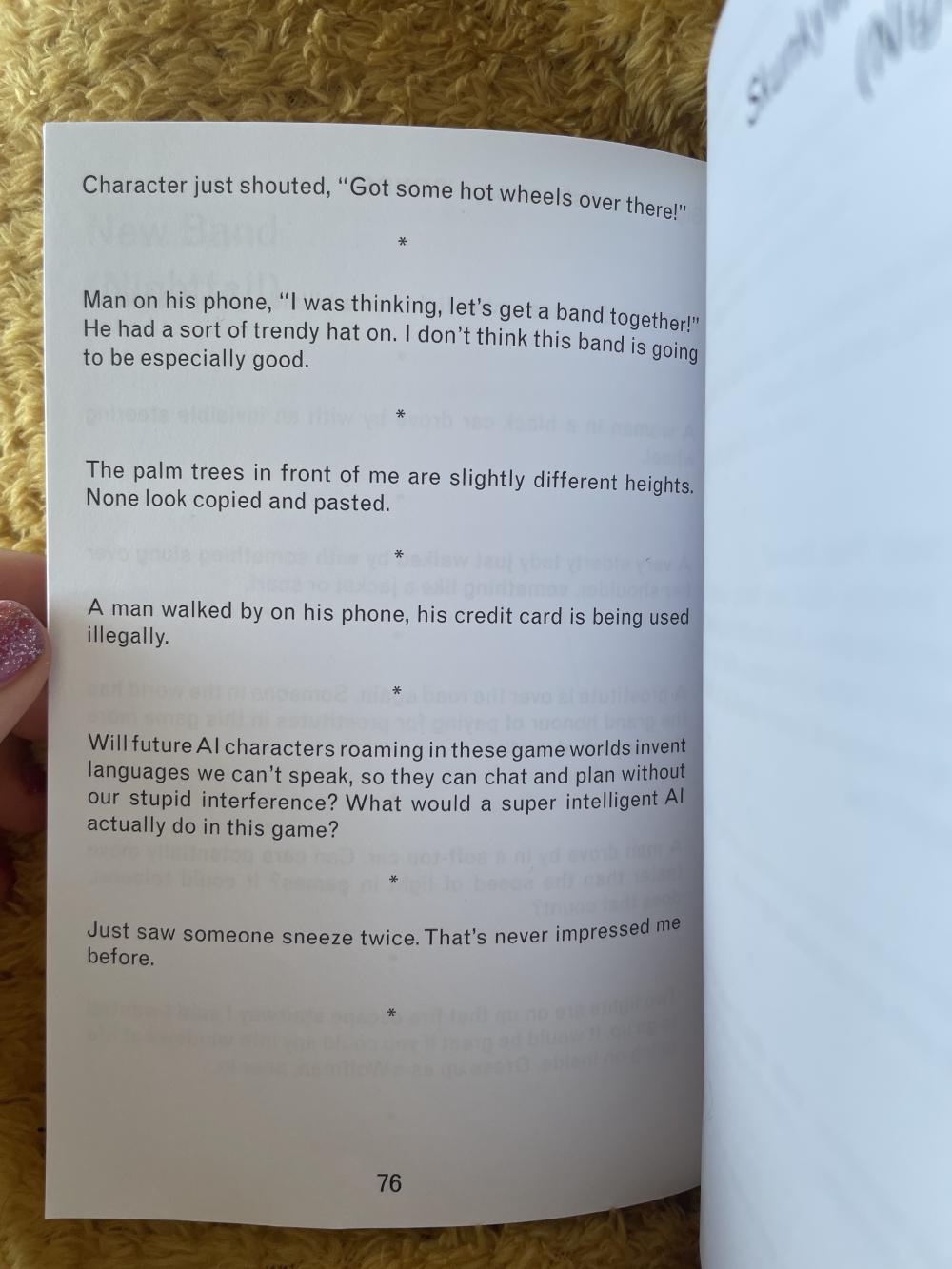