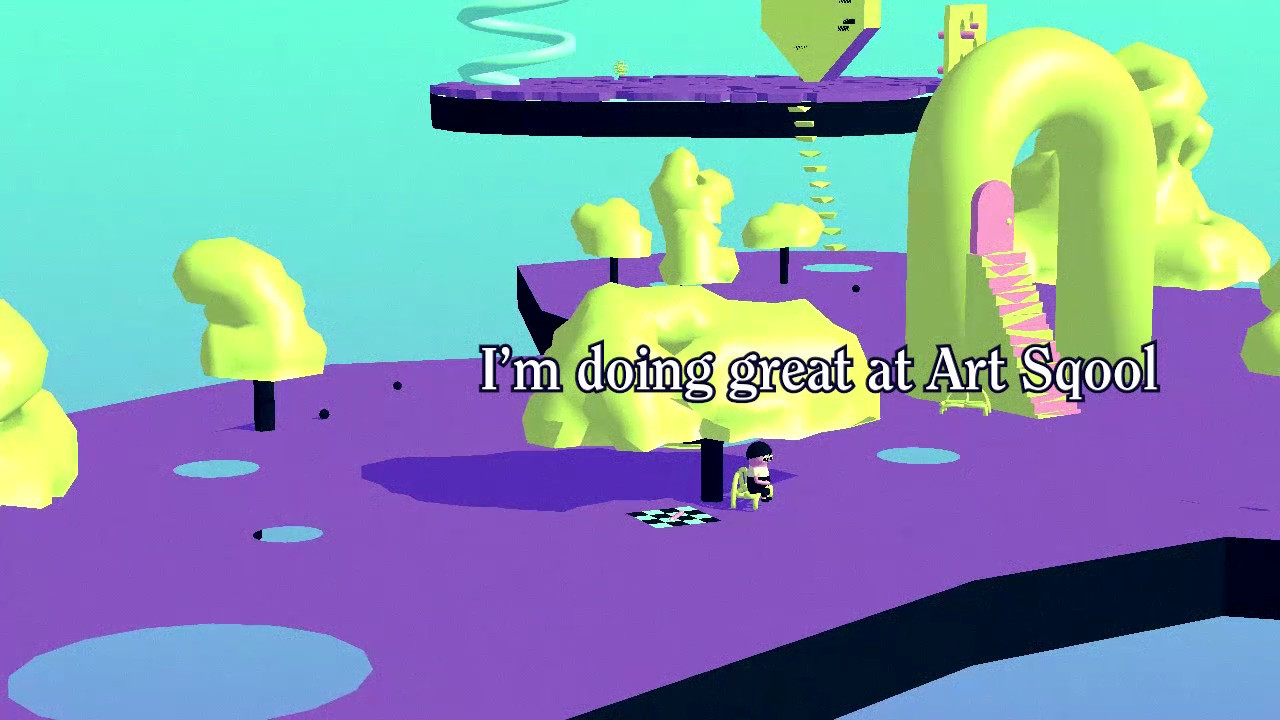 Made by: Julian Glander

Spoilers: nothing to spoil tbh

I was in art school from 2012-2016 for a whole foundation and degree. I arrived as a painter and waif-child, quiet and alone, away from home; drawing things exactly as they appeared, and accidentally giving myself food poisoning on the regular because I was just that bad at cooking. The years that followed were strange. When I look back, I don’t remember having a lot of fun. Instead, I remember becoming a person who had learnt to think in new directions… and it sort of hurt to get to that point. You know when you stretch enough to reach the tight upper limit of your body, and the moment stings but afterwards you feel better, lighter, taller? Art school rolled over me - a heavy weight, a constant push forward to a new now we were all being asked to co-create. I cycled through painting, installation, datamoshing and film, and eventually script-writing and performance. I painted one wall of the studio green so we had a green-screen at our disposal; I went to the library a lot but I didn’t read much of anything. We watched a lot of reality TV on our laptops and worried about the future. And I remember plenty of long bus rides on my own to exhibitions and screenings because I thought that’s what I should be doing - especially here in London - and the thing is, I didn’t enjoy or understand a lot of what I saw. But I came out the other end with more energy and anger, more colour in my mind, and a thousand ways to describe how it feels to have to be a person in the world. I was very glad I went.

In November, the video game Art Sqool was finally ported to the Switch, and everybody and their nan sent me the trailer. In the short clip, the tiny bowl-cut-headed avatar walks around a bright blue world and squeaks a song that ends with the lyric ‘opening up my brain at Art Sqool.’ I thought we were going to be on the same page, this game and I. I had this overly optimistic vision of a game that would allow players to feel the big stretch of art school for themselves through art and exhibition-making, the studio, good conversation, and the challenge of new dimensions. But this game was only one of those - art-making - and it barely achieved even that.

In practice, the player is given 50 drawing assignments that are delivered by a cartoon character who represents the school’s neural network professor. Draw a toy you remember, a bicycle from memory; listen to the room you’re in and draw the sounds. The player can search through a few platforms floating in space to find new brushes and colours to add to the toolbox, and then use these to create drawings on a small white box on the screen. Once a drawing has been made, we pop back to the professor by walking through door shape arches in the different forms that populate the landscape, or more dramatically by falling off the edge of the world. The fuzzy professor delivers us a grade based on colour, composition, line work and the mysteriously named ‘approach.’ If you get too low a grade, you have to repeat an assignment. After the 50 drawings are done, the game finishes and that is the end of that.

It was narrow. It felt like Art Sqool was setting up the first half of a joke and then running around the corner to hide because it had forgotten how to tell the landing. The art style sets out some bubblegum islands and clouds, with scooby string shapes, googly eyes, and random designs that break up the colourful bumpiness like a flat house with all its windows and doors staggered behind the facade like a kid’s pop up book or some modern sculpture. But the map is so incredibly small that even the wholesome, safe style gets boring very quickly. The writing in the game feels grounded in the linguistics of doge (the avatar is called froshmin) but it is never very funny. And then we’re transplanted into the little silly body of that art student and put to work doing assignments 1 to 50 with no drama to the shape of that gameplay - no growth, no magic, no exaltation. I was disappointed, even outside of my own expectations, because it was so thin, so straight. I thought that when we had handed in the final submission, something fun might happen like the very obvious idea of an exhibition. But we just get taken back to the home screen. We could have chosen our favourite drawings from the 50 or the best assessed; we could have mulled about a room with other students and heard from them. Throughout the game, we could have been offered better conversations with the weird cartoon professor that might have justified what often felt like totally arbitrary assessments; the writing of which could have explored aesthetic, quality, craft and form in the light way the game seemed to promise in its overall branding and design. I don’t know. I don’t know why I’m giving the game ideas, even if they do feel like obvious conclusions in a game about art. Just given the subject, Art Sqool wasn’t a very creative game.

It, er, wasn’t very playable either and it was hard to seriously engage with the drawing assignments amongst the mess. The user interface for drawing is dire. Holding ZR and moving a tiny trigger around a small white canvas on the Switch screen does not feel very fun at all. I used my finger in the end but it was still not comfortable - and I am sorry but the finger felt patronising as well. I suppose PC players might have achieved slightly more accuracy. But all I could think about when I was playing was how much better the game would have suited the DS with its innate stylus. For the record, I did pull out the DS stylus but the Switch screen completely ignored it - but you can buy a Nintendo brand one for the Switch if you so please. I was stuck with what I had and what I had did not feel like it was a good foundation for the creativity the game was asking me to explore. I know people might argue laying down your own restrictions and challenges is a solid way to force out some new ideas and lateral thinking (I am currently doing a nuzlocke after all), but I don’t want to feel creative in spite of a bad user interface. I would prefer a more nicely designed game with some difficulty options on top.

Finally, I would just say that lately it’s like all the indie games I play on Switch would have been better experienced on PC; and that some finesse is choked out of a game after it has been ported onto the Nintendo Switch. Throughout Art Sqool, the camera would get sucked in too close to the avatar. When I was walking through the tighter parts of the map, it would send the game flying into clipping-hell. If you aren’t familiar with clipping, it’s when two parts of a game incorrectly overlap and obscure each other, and it is just visually very stressful. Playing this, the screen would flash madly and I would lose sense of where I was to even jump out of the tight squeeze and thus stop the flashing. Either the camera needed to be smarter or the map needed opening up so that the clipping didn’t happen in the first place, but it would even jump from a conversation with the professor to straight up clipping without me doing anything to bring it on. It drove me a little bit mad. It is like the video game equivalent of standing at the till in Aldi while the check-out person zooms food and drink of all different sizes at you, and you have to bag it as quickly as possible, and there’s a big line, and she’s also asking you to pay and you’re trying to look up and down at the same time and - ah. I can’t deal. Finally-finally, the font was too small and there were no options to toggle it. The literal smallest font I have ever seen across both games and eye tests.     Problems all around but I’m glad I got to go to real art school and ay, maybe one day someone will give us an art student RPG and we can all dye our hair the same colour in-game and chat shit in the studio. I promise if it happens I’ll review it.