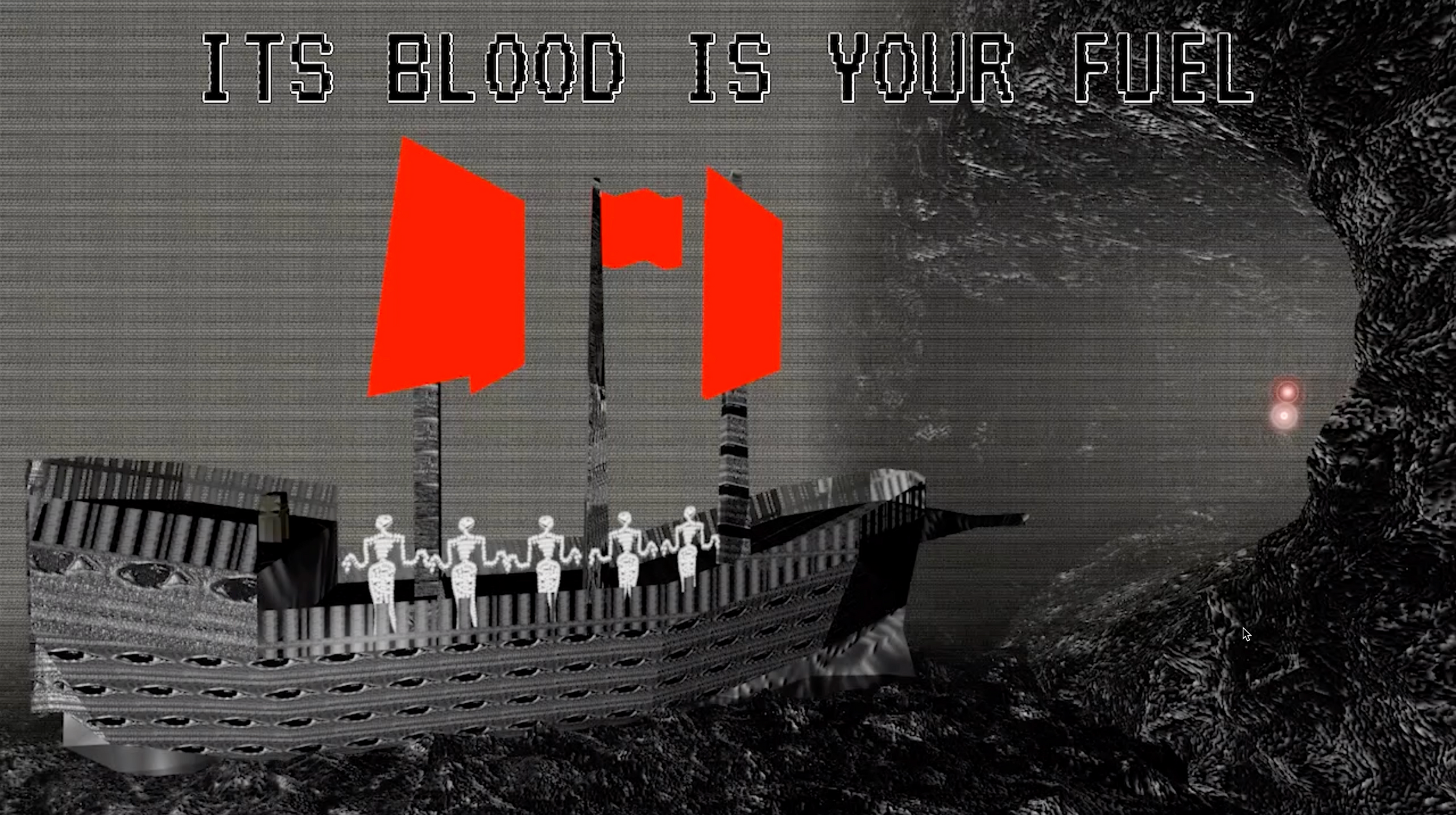 Made by: Danielle Brathwaite-Shirley

Spoilers: multiple endings and I talk about one of them. it’s only a ten minute game so maybe play then read or read and then play, it’s quick

‘The waves remember your body but these waters are not the same ones you are used to. Thank God. Press any button to enter.’ Lights off, headphones on, the screen is speaking directly to me in the dark. Unable to make it to QUAD gallery in Derby where this game is currently being shown as part of Danielle Brathwaite-Shirley’s first solo exhibition, I am playing blacktranssea.com on my laptop at home. I played it once and then I played it again immediately afterwards to choose different options, to take myself down other paths. I looked away to process. Later, I played the game a third and fourth time. It lasts around ten minutes from start to finish and each time I went in, I thought about how I would have only played it once if I was in the polite space of the gallery — rushed, bright, un-alone — away from the comfort of my home.

I want to write quite a full description of this game, not just for the reader who may not have played it but for posterity. In keeping with Brathwaite-Shirley’s practice which focuses on the archival of Black trans lives, I know a written account has value. In time, with forced obsolescence, censorship, broken URLs and a likely climate collapse to come, an independent game like this might be lost at some point. So, this is what goes on in the browser:

In BLACKTRANSSEA, an avatar pulses in the shadows. It’s hard to attach words to what they look like. I can only sketch what it is I think I see — which is a face mirrored down the centre, a glint of earrings reflecting shallow light. The same grey reflections stretch down the shape of what appears to be a glossy black puffer coat. The avatar is also wearing blue gloves as well (or their hands are blue, stiff polygons, I’m not sure). They are holding something in the crook of one arm. White, red, intestinal, it might be a baby or a worm. An alien? Something. It isn’t clear what.

Speaking through vocoder distortion and a hard thick font across on the screen, the avatar in front of us says that they have found something. After nearly getting scammed by clicking the link on an email that said their bank account had been compromised, they unplugged everything only to turn the computer back on to discover a new file on the desktop that hadn’t been there before. Filename: 'set sail,’ right there in the middle of the screen. A story within a story, a game within a game. The avatar clicks the file and inside, the art style dissolves into haunted digital scenery — like white noise except it is black, white and red. A frenzy. There is a boat in and amongst the diffraction, and the lines of the water jostle around it like we are seeing the sea through an old infrared scan.

The ‘set sail’ file prompts text on screen that asks us ‘who were your ancestors?’ The two options that we can click on are ‘those that were carried across the sea’ and ‘colonisers.’ I clicked on the latter. As a coloniser on the boat, we can choose to look at the empty cargo space, communicate with home, or see into the past. Narration is brief and direct. For a second, we snap back to the avatar who has stepped away from the computer and is now lying down in a red-lit room. They think something from the file is now with them in the world, and then it’s time to go back in. Depending on what the player clicks next, we take the boat in different directions — one option, for example, sails us through the wound in the sea and back out the other side, passing the boat of colonisers through a tunnel of waves. A terrible, historical portal.

Outside the computer, the avatar feels themselves changing, feels the air and their home changing with them too. This is because of the new constant presence of the shadows that seem to have seeped out of the ‘set sail’ file. Back inside it, the ship we voyaged on is destroyed in firing lines of glitches and lo-fi explosions. And finally, we are back with the avatar to end the game. They give a final monologue. ‘I began to feel myself slipping away. As my ancestors in history were erased, my mask slipped. My true face was revealed as the shadows in my house closed in on me and began judging me. And the crimes of those that came before me, they consumed my soul and began to slowly remove my existence from this world so that they could replace me and my lineage. With every breath part of me was lost until I never even existed.’ The mask they have been wearing this whole time is removed to reveal a Rorschach inkblot face below. The avatar falls back onto a bright red ground that deflates like a rubber kink-sinkhole into nothingness. Then, the game is done.

The first time I played: it felt like the first listen of an album before you can really hear the words. A wash of atmosphere, of monochrome and blood. I couldn’t understand what was going on. When I don’t know what is going on in a game, a film or a book, I always wonder if I am not supposed to know. Maybe the curtains are drawn and I’m only allowed to look at this thing through the windows. The door is shut so I cannot fully come inside. Maybe not getting it is the desired affect of the abstract handling of it all. Or maybe it’s a language of allegory I’m not familiar with because of who I am (and am not). With no grip on the story just yet, the art is all I saw and felt. It was art in two moods. It was taut, harsh, jigsawed and bursting at the seams when we could see the avatar in the shadows outside the computer. Inside the ‘set sail’ file, the style became a collage of explicitly digital textures layered on top of one another. Billowing, hot, like smoke over smoke but unreal. I thought: I would love to play a long game in this second style — let the computer haunt my eyes with net art horror and tell me stories in a blur I don’t understand.

The second time I played: I tried to find my footing with the narrative. It’s not that there needs to be enough guidance in the game itself for the player, I get it, but I find that I am so story-first in every game I play and it is just how I feel most engaged.

In all the endings I got to, the ship was destroyed. QUAD’s website explains BLACKTRANSSEA ‘is a work that examines an alternative past where the ocean itself did not support the journey towards colonisation made across its surface.’ I didn’t reckon with this until I read the exhibition copy but then I could see it clearly. And it is a powerful image: colonisers drowned by the sea. Good. Drown us in a game, in a gallery, drown us at home on repeat.

But there was a gap between this happening and me feeling the weight of it, and I think I know why. I read the game as being in third-person, not first-person. I think maybe because the ‘who are your ancestors’ question came a little while after the in media res opening, so I assumed we were catching up on an email scam that had happened in somebody else’s life and not in my own. If the game had made it clear from the get go that we are in fact the avatar in the shadows and therefore the one accessing the file, and the one whose life and lineage is wiped out by the sea, the death would have been more acute — more directed, more mine. And I bring this up because I believe the death should be more directed, totally locked on; the shame the coloniser player is made to feel should be present like a hard finger jabbing us in the chest. But the structure of the story, the strafing in and out of the computer, and the brevity of the text on top made me miss the shots being fired at me (until I read the answers).

I waited a while before I played the game for a third time, and I found myself thinking about the way BLACKTRANSSEA will exist in a gallery, in an exhibition. The game is confrontational beyond just its art style, which is dark and hot and dense. The setting of a public, cultural space might amplify these feelings of shame for coloniser heirs. Plus, audiences might be disarmed by this game anyway, learning for the first time that this is something a game can do to them, when the general public’s idea of games is something kids do on the schoolyard or gun simulators and nothing in between. And I like that, I am glad. I am glad that this game is online but that it’s there too, in the strange majesty of a funded institution. Ten minutes of play in this instance do a lot: the game puts us on the spot, tells us a story, and gives the player a challenge they cannot overcome in a game they cannot beat. It is a game that happens to the player, where fate is already decided — it is damning and fast about it (and abstract in a way that its damnation might take a minute to feel). It takes the active, generative aspect of play away from us and it gives us something else: an alternative history that would change the world as we know it. It is imaginative and natural, somewhere between folklore and horror. And I am glad the public will feel it.

The final time I played BLACKTRANSSEA, I was trying to remember which options I hadn’t clicked on yet because I wanted to see the many ways the boat for colonisers could be destroyed — which sounds indulgent now that I type it out loud. But it made me think about the big option I couldn’t click on — the first split in the path for ‘those carried across the sea.’ I wondered if the ship would be destroyed or saved in their new fate; I wondered if the avatar would be destroyed or saved as well, or whether we would become unmasked and non-existent either way, together. I don’t know and I cannot tell you — I can only guess — and so this review feels like it finishes mid-sentence. I wish that I could now link you to a text that could carry on thinking about it: a text that could be a second half to offer up to the Black trans archive, a text that could be another way to feel and remember what this game can do.

I came, I saw, I tried to conquer but I died. ‘The waves remember your body but these waters are not the same ones you are used to. Thank God. Press any button to enter.’