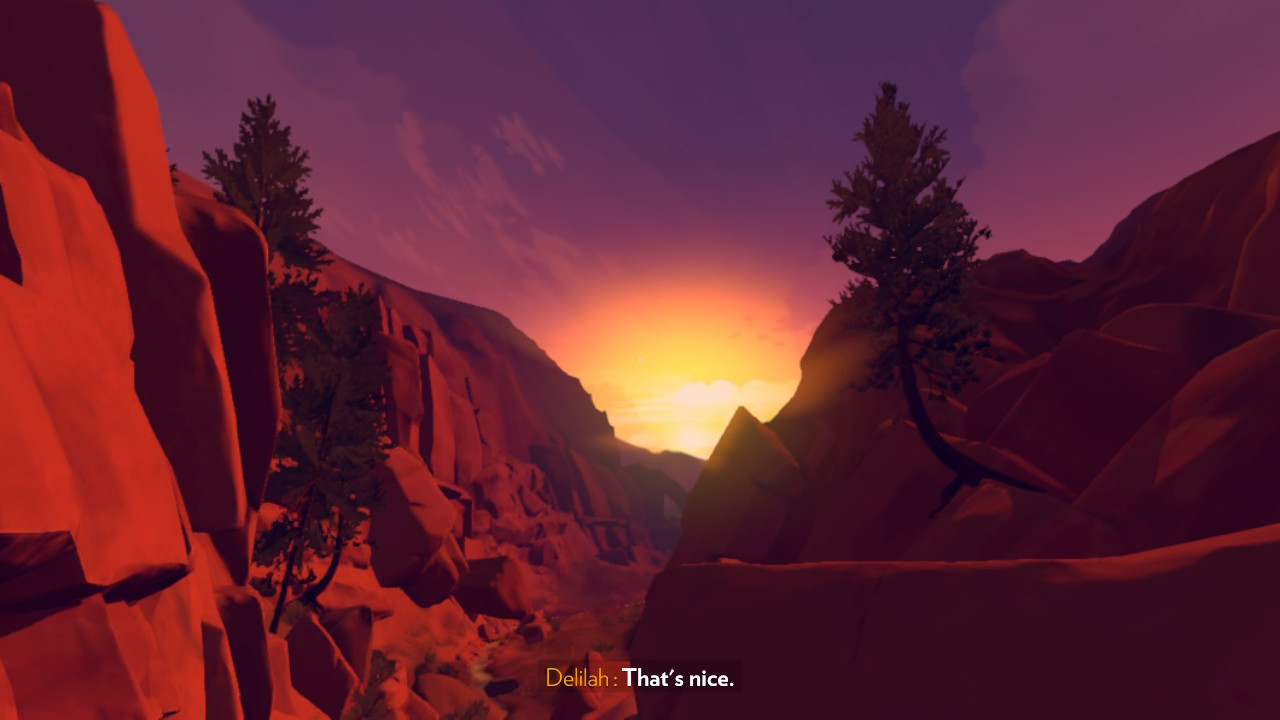 I don’t really know what to do with myself and I know that sounds dramatic (and ay, this is only partly corona’s fault); I played a game that’s rolled my brain flat and burnt the edges of my head. I dunno how to write about this. feeling slow-mo and dazed, not sure which way the words will go. So… I played Firewatch, but it is a game that began and ended with questions because, tbh, I didn’t exactly know what I was playing. You know when you make milk for a baby, you squeeze some out of the bottle and onto the inside of your wrist to test the temperature? I’ve been playing video games without reading what they are about, just letting milk fly all over the place and really trusting our reader’s recommendations. n this is where it took me:

Firewatch - and i’m writing with spoilers because this game’s been out for years - was produced by Campo Santo & can be played on many platforms but i went with switch. It begins as a words-on-screen story with a few brief moments of slice of life action to get you used to the controls. You are Henry, hi. you’ve just met a girl and mistaken her for a student when she’s actually a professor; a week later you’re dating, it’s fun; now you’re falling in love, picking a dog and talking about the future. live laugh loving together until Julia gets a teaching job far away… and yeah, it’s ok for a sec, but there’s an incident where she’s out-of-character angry with someone at work. and fuck: a doctor’s appointment reveals early onset dementia. she’s only 41. You try to look after her but it gets to the point where she doesn’t even remember who you are. You take her somewhere she can be looked after. everything fades to black.

DAY 1 is announced on a loading screen. You, sad Henry, are standing at the edge of a national park in Wyoming where you’ve taken a summer job as a lookout to watch for accidents or vandalism(s) that could become a whole forest fire out here in this dry crispy heat. sitting in a tower, waiting for something that might not happen, u radio across to Delilah, another lookout who is riding the summer out just like you. if that was all, I’d really lose my mind. wounded, lonely and middle-aged. but his emotional recovery (and its delay) is completely interrupted by a conspiracy that stretches out across time and the forest around him. Firewatch invited me to lie down in a bed of depression, tucked the edges of the quilt around my body so I was held and warm, and then the end of the bed sprung up cartoon-style and off I went sliding backwards into the abyss.

the conspiracy is nothing supernatural and nothing good, it’s something you pick open like a scab with dirty, blunt fingernails. There was another lookout Ned Goodwin who worked your job and brought his kid along with him one summer. the boy, Brian Goodwin, was reluctant to be there. I mean, what kid would not be bored to death or driven mad by his weird angry dad. Brian had built his own den to get away. And no one really checked in with them after their watch, assumed they came and went. But Henry follows his instincts, and at the bottom of a sad and glowing blue cave, he finds Brian’s kid skeleton lying there all alone. the music rises, it’s just horrible. And we don’t know if Brian fell by accident or if his dad killed him, but we also discover Ned is still here now in the park, paranoid, living a hermit life in secret, away from everyone, his past n his truth. Of course the dark parallel here is Henry. his wife got dementia, he felt like who she was was no more, and he tried to sidestep out into the wilderness to try and keep on living; only ever seeing the edges of people, worried and stalling. henry can’t stay away from julia forever, and the thing is, she isn’t dead. she isn’t Brian, not yet. there’s still time to make sense of what their relationship means now. That is where the game is held for me, that is where it’s heart is. it looks iconic, it moves so well, but this knot is why I’m glad I played.

Eventually a forest fire kicks up and the last moments of the game involve you making your way to an evacuation point through thick smoke and colour. it reminded me of fear factor, like: can you complete this challenge while the tank you’re in fills up with water? I feel naive because I did not know games could hurt - looking back over the years everything I’ve played has been Happy as standard: colour, quests, magic, animals, family, winning, finishing. they are always round and comfy, or at least sharp places where it’s satisfying, exacting, to get things right. this quite literally was like nothing i’ve ever played before. the story stung, I can still see it behind my eyes, but i also loved the gameplay, the tasks, orienteering, and multiple choice answers to navigate conversations with Delilah across the handheld radio: flirting to cope - who wouldn’t. you lot said play Firewatch and now i’m a baby biting into a lemon for the first time and freaking the fuck out. so fuck you. i’m half messing - turns out playing a Sad game was great, i’m so happy for the recommendation and also for like, the honesty this game laid out. No one person can take care of a forest and we need each other to make it through hard love. Thank you campo santo for the story; it was both good distraction from and entanglement with this 2020 world pandemic. I just… have no idea what to play from here.