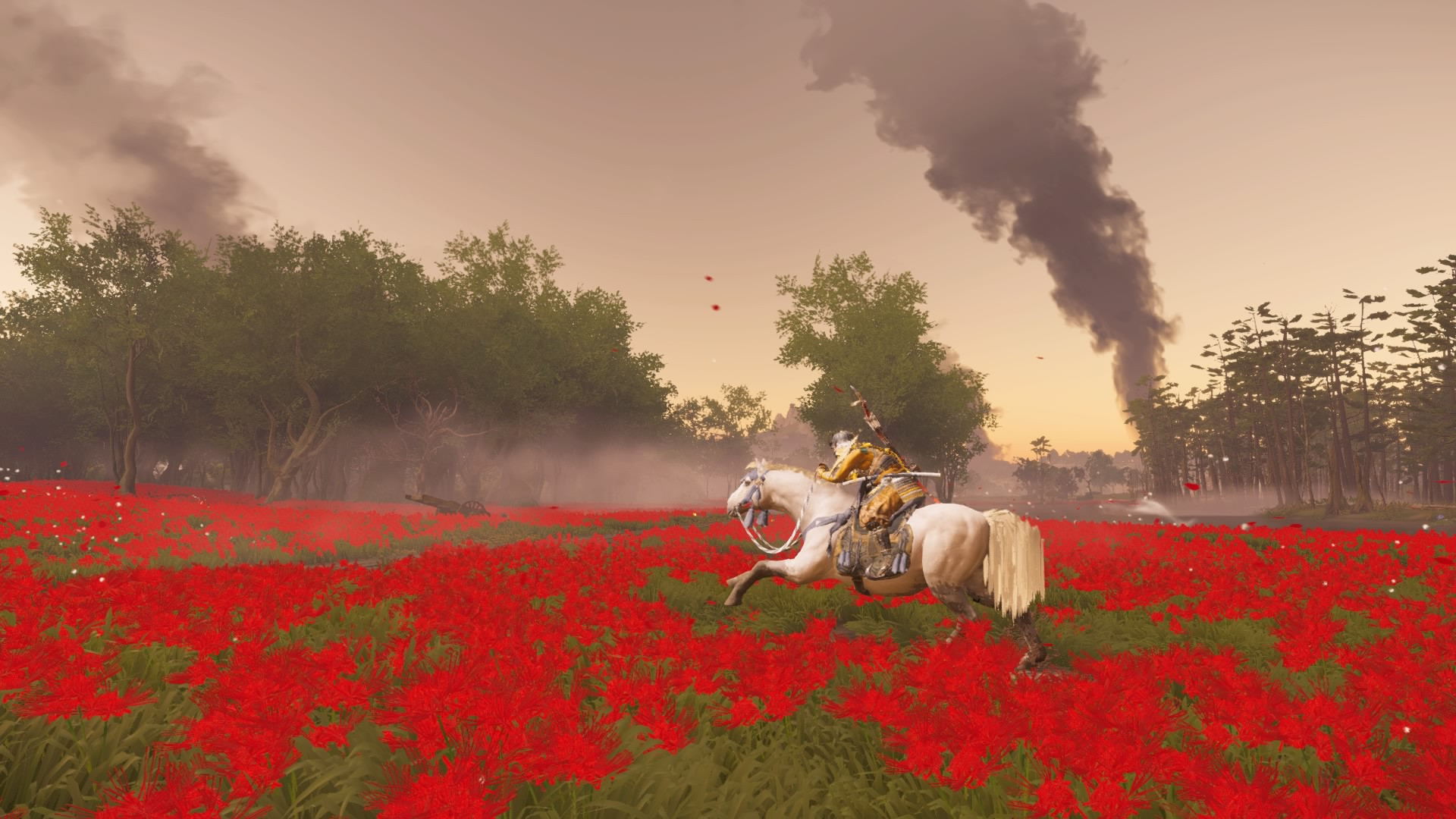 Made by: Sucker Punch

Spoilers: light on details. I do talk about a mission in the middle of the game but it’s not story critical, and while I describe the general premise I don’t discuss how things end.

Everybody in my life that has played Ghost of Tsushima has told me the same thing: it looks great but I didn’t love it — I didn’t dislike it, but I didn’t love it either. An awkward, middle-ground report. I never asked why they felt that way because I wanted to play it for myself. But now I have and I’m there too. The game has jammed me into ambivalence and I can see exactly how it has happened, and how it might have happened for my friends as well.

Ghost of Tsushima is an open world RPG set on the island of Tsushima. The story takes place way back in 1274. A Mongolian invasion has begun. Attackers are trying to cut through the island before heading to Japan’s mainland. The invasion wipes out Tsushima’s samurai in a dramatic opening battle on the beach — it is a huge loss for the island’s people who are left feeling totally vulnerable. After the battle, a woman called Yuna from the nearby town rescues the only surviving samurai and nurses him back to health: Jin Sakai, our player character. He happens to be the nephew of Lord Shimura who is captured in the fight. Jin, with the help of Yuna, then does everything in his capacity to free his uncle and take back every village from Mongol rule in the process. The invaders have quickly set to work terrorising the islanders and Jin tries to terrorise them in return as a means of restoring order to his homeland.

The game is beautiful. It is stunning and bright and completely saturated in colour. Nature is in full bloom all over the show. There are pink skies, flowers, bamboo forests and wild animals scattered through the fields. I soaked in onsen to start my day; I rode my horse under moonlight as today became tomorrow. I loved standing at the edge of a waterfall in golden hour and surveying the ground below. And the air around me, wherever I was, always glittered with something: petals, leaves, fireflies, twinkling ashes, or even snowflakes once the map had opened up. You follow sweet foxes as they jump up and down in the grass and take you to shrines where you can pray alongside them. Plus, in order to navigate somewhere, players can select a mission from the menu and the wind will guide you there. Faint wisps on the screen would show me the way, gentle hand on the small of my back. And so, I could not stop photo-moding. I made a point of trying to take pictures of all the different trees I came across because they were luminous and fairytale-like.

The game was so beautiful that it would come as a surprise when I stumbled upon the many bodies burnt by invaders left at the side of the road. Like, oh yes, the story. I forgot about that. I was too busy looking at the butterflies. The art style is at odds with the serious colonial panic of the game’s story. I wrestled with that dissonance between subject and style, at times feeling as though it made the violence more acute, like a nail sticking out; like a body burnt at the side of a field of shining yellow flowers. These people don’t deserve to be invaded — their home looks so perfect, and war does not make sense here in this perfection. But in the end, and overall, I think the beauty defanged the story. The Ghost was never very ghostly because it was as though the lights were always on; a siege was just an angry and cinematic cartoon; and a battle on the seafront did not make my shoulders tense up because I was walking into a blue and starry scene. Stealth-centred gameplay wrapped in attractive decoration forces invisibility to suddenly be visible, and not only visible but aesthetic — photo-modeable. I stopped so often mid-fight to take a picture and I’m taking that as a sign that I wasn’t caught up enough in what was actually going on.

Distraction was easy, was welcome, because the overarching story was not as sharp as I would have liked. It had the right shape, maybe there could have been more powerful turning points. But the game didn’t present us with enough details about its characters and so my attachment to Jin’s plight was loose. The in media res opening with the beach battle did not help. Although I enjoyed the frantic start, it did nothing to endear me to the uncle I was supposed to want to save. The inciting incident was not very inciting. I thought that after this opening, the game would make a point to catch us up on the relationship between Jin and his uncle Lord Shimura but the flashbacks we are shown are few and far between. They are mostly logistical combat-teaching memories. I wanted more. I wanted to know why our uncle was so bound to his code of honour, when in this present tense, it meant his island was dying. What happened to make him cling to rules like that? Why does he accept his traditions uncritically? We can assume pieces here and there but spelling it out, showing it to us, could have made the story feel more urgent.

There was one mission that made me sigh out loud because it was a wasted opportunity that could have fleshed out these characters so easily. Well into the story, Jin returns to his home in Omi. He is reunited with Yuriko who helped his family for a long time and who makes mention of the terse relationship between Jin’s late father and the uncle that raised him in his stead. Yuriko alludes to some differences of belief when it comes to tradition and honour between the two of them but this alluding isn’t enough. There could have been cutscenes of heated discussions from the past! It could have amped up the current clash between Lord Shimura and Jin even more — a fateful betrayal that we learn means history is repeating itself! Words from Jin’s father, to go with the armour he comes to Omi to collect, would have added some much needed emotion, motivation, validation and drama for his son’s anti-hero development. I missed these scenes when they didn’t come. It felt like I was half-way through reading a book and somebody had ripped the midpoint out, but I decided to carry on reading anyway (and I don’t think I would have if I didn’t need to write this review, which is a review in itself I guess).

The other character that felt under-characterised was the antagonist of the game, Khotun Khan, the Mongol leader in charge of the invasion. We know he is a big man with a lot of flashy armour on. We hear him mention at one point the family pressure he is under to take Tsushima. I couldn’t tell you anything else about him though, and that’s a problem. With so little information, it means he isn’t made to be scary enough. Antagonists should have a persuasive argument that, even if we don’t agree with it, stands up as an equal challenge to the protagonist in order to create the good drama we all love in stories. Without these much-needed details, without us knowing the depths of his motivations and his own villain origin story, Khotun is a cardboard cut-out instead of a real threat. A truly evil antagonist can help make the gameplay attached to a story even more motivating because we so desperately want to beat them. Ghost of Tsushima is a story told in vague brushstrokes, words and actions layered faintly over the heavy paintwork of the art itself. It’s hard to see past that.

And in lieu of emotional attachment to the story, I let my gaming-energy focus in on the combat instead. I enjoyed the pay-off I felt when the stances clicked in my head and I could switch easily between them in the middle of a busy fight. It meant fluid, constant variation and it kept me on my toes. I loved the bamboo strikes that would give you more Resolve (best bit of the entire game to be honest). The ghost weapons were a thrill at first but after using them to death, I wished there had been a couple more approaches to choose from. And finally, I did get bored when I realised every Mongol-ruled village meant the exact same dance; and when every captured peasant on the road repeated the same one or two lines, I decided to just stop helping them out of sheer writer-frustration.

I find it difficult to write about the things I love, easy to write about the things I hate, and impossible to write about pieces of culture that make me feel nothing at all. This is one of them. I didn’t like the story, and even though it struck me as a strange choice, I did like the art; I am stuck flailing between those two truths. And my opinion on gameplay is marred by that ambivalence. It was fine but I so wanted it to be more than ‘fine’ because it had everything in place to be great. If anyone asked, I wouldn’t recommend this game but I wouldn’t not recommend it either. I am not committing to anything. I am going to throw my hands up in the air and then let you see the one thousand screenshots I have to show for my time on the island of Tsushima, and you can decide. Bear in mind though, half of those will just be pictures of trees but I think that says enough.