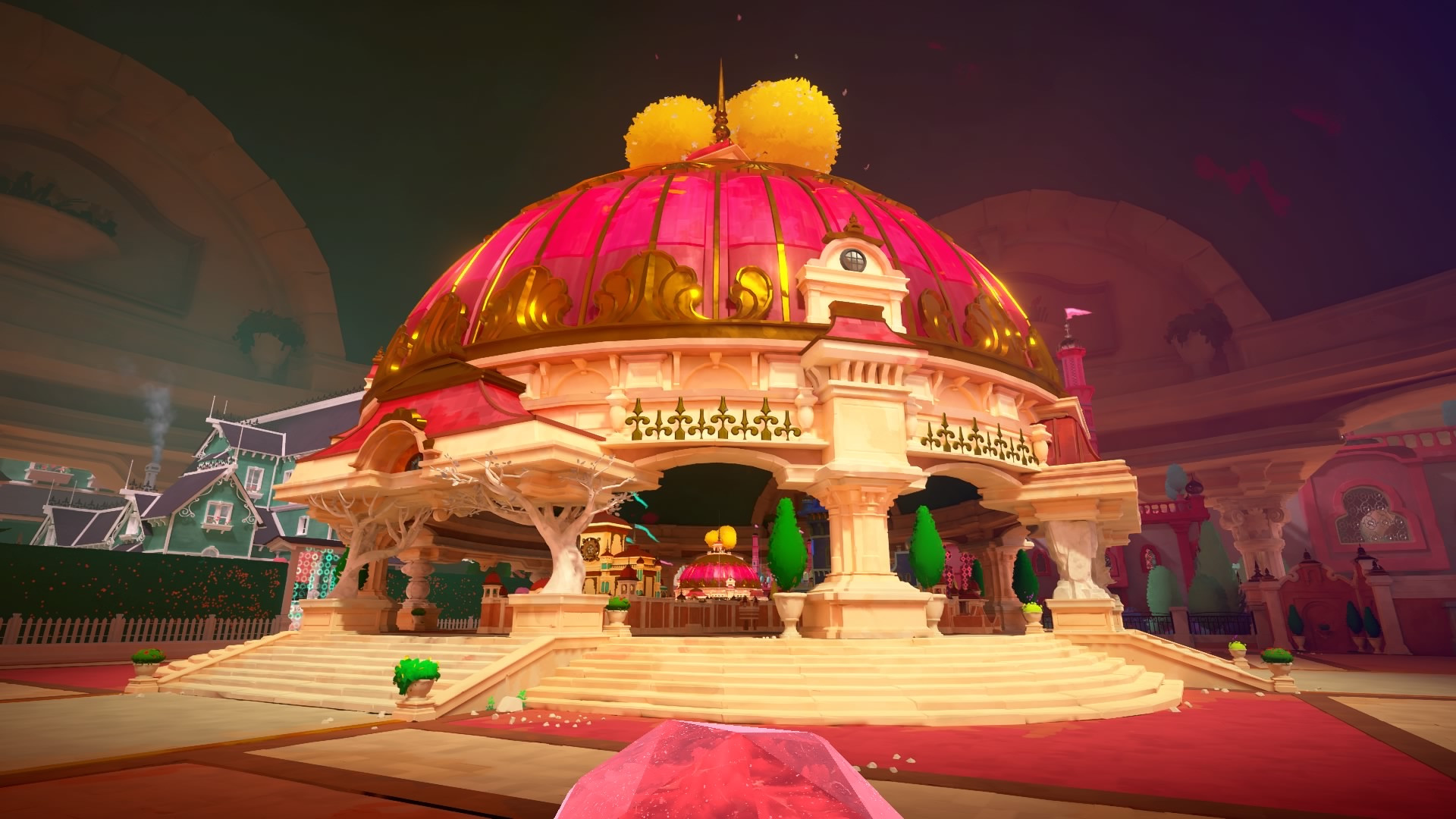 Made by: Graceful Decay

Spoilers: mention of locations in the game

‘It’ll keep getting better.’ When I first met Michael, I was full of wishes. I think I loved him before I loved him; I think I knew what was going to happen. My boss at the time said, ‘It’ll keep getting better.’ We lived in different cities so I messaged him the prophecy and he told me quickly that it was true. I remember that we spoke about how pearls form around bits of random stuff and we were going to be a pearl around that idea. I remember squeezing my phone around his reply. He was right, and so was she. We’ve been together for almost 5 years now. We’ve crafted our own little past, and I’ve made new wishes for the future. I touch his cheeks, I ask him silly questions when he is trying to sleep, and I distract him when we shop because all I want to do is play. He’s so good. I’m happy. And it’s exciting to believe that all of this will only get better.

When I got sick at the beginning of the year, I didn’t need to ask for his help because he had already become my stand-in. My arms, my legs, my face and voice and mind. It feels like he is holding every part of me until I can pick myself back up again. At the moment, I even have to outsource my thinking to him sometimes. My brain is a small room with a small table inside, and I can only think about what fits on it, just one thing at a time. I can’t juggle ideas or see around corners. I forget words, smash others together, and I say things in the wrong order. It is taking me much longer to write as well; I used to be able to hold all the little sections in my head, remember what came before and what was due next - now I pray it’s all in there and hope the reader has a nice time along the way. The new stupidness has a drunk-ness to it, a funniness and a hopelessness too. I could not be trusted to operate heavy machinery right now — or triple AAA games for that matter. I had only played small independent titles until this review, stuff I could play on the Switch screen in bed. I didn’t want anything I couldn’t handle.

Small mind. Only one thing on the table at a time. Michael is helping keep things clear, and I think the pearl has gotten bigger again.

Last week, he came into the living room and said he’d bought us a game. We never play together. We’ll watch each other, play against each other, but we’re never on the same team. I think that’s been my doing. In the past, I’ve been competitive and even a bit defensive knowing that even though I’ve played more games than he has, he is naturally gifted at everything he does. I was therefore afraid I’d lose the only crown I have in this relationship, after best boobs and bum. If there was ever a time to try though… I have no ego anymore - I used to, but now I need too much help.

Michael had downloaded Maquette. Developed by Graceful Decay and published by Annapurna Interactive, Maquette is a puzzle-adventure. The player is led into the game and then shown that there’s a model version of the game’s map at the centre. It’s small, pretty, toy-like. Interacting with things inside the model changes the corresponding objects’ scale and position outside in the big world. Beyond the big world, there is an even bigger world, and another one again outside of that. The game presents a Russian doll of game places in a recursive map, like the onion thing Donkey says in Shrek: layers. You can also move outside-things into the maquette to increase their size where they become larger in relation, and vice versa. And I know, it’s a confusing game, even harder to write about. But basically it’s the player’s job to do some drink-me-eat-me puzzle-solving in order to get certain things, like staircases, keys and ticket stubs, at the exact right size they need to be in order to complete a level. Every time you do, you move the story along: a story about a relationship between a man and a woman which is fed to us line by line.

It was funny. I was sort of nervous. When we loaded it up, I pictured the ASCII meme that does the rounds on Twitter: the big rabbit bouncer with folded arms protecting the little bunny by his side. The game doesn’t have a co-op mode of its own, we just planned to pass the controller back and forth. I thought, well, if it’s too much, Michael can be my brain. And in the end, it was a good job we played together because I could not have finished it on my own. Maquette was very, very hard.

I loved messing with scale, and it was fun warping through space. You would be at the right size in one place and then walk over a threshold into the land of giants where the air would become heavy above, the sound suddenly slow and exaggerated. The art direction around the scale-bending mechanics felt genuinely beautiful and suitably magic. The central location for most of the story revolves around this deep pink domed building which is held up by columns and blanched trees. There are light gold stripes along the roof that glint and more gold, thick now, in scallop-waves along the edges. A baroque leaf flourish on railings patterns the sides, and you can spot yellow trees at the very top, out of reach. When we walk out from under the dome, because of the nature of the game, there is another dome hundreds of metres above us, and the whole place feels safe because of its shelter. Maquette takes us to a fairground, a moonlit garden, a church, houses in the forest, and a misty sky of floating bridges. It is consistent in its wonder, in the glowing butterflies and theme park-breadth of architectural styles. But as beautiful as it looked, the puzzles began to get stuck in my throat and I wish (I wish!) they hadn’t.

When the game flowed, it was so cool; when the puzzles were fair, I loved it. But in the middle section of the game, things got stiff. We fell off the rails without knowing because Maquette never raised its voice to say so. There were red herrings, tangents we’d follow, and ideas we had that seemed like logical conclusions but would instead place us neatly in a softlock (save the game frequently and be careful). Yeah. I just think when you’ve been stuck for 10, 20… 30 minutes, a game should recognise that you’re cold, freezing, so far from the answer, and step in to offer a hand. When we came up against the harder edges of Maquette’s unforgiving design, it felt needless. If the Maquette designers aren’t up for helping players in any way whatsoever, they could have allowed us multiple ways to solve a problem, or higher walls so we couldn’t escape the ring in the first place.

Like, okay, it was funny to struggle on a puzzle in good company, and pretty slapstick to badly articulate half-baked thoughts like, ‘what if we use the Maquette like a hoverboard to get there quicker because, think about it, we can move faster inside because we are bigger even though we haven’t changed size at all.’ And anyway, there’s something to be said about the slow fun of getting stuck, turning a game off, sleeping on it, and coming back with an idea that finally works. It was good to go through that challenge together. The second act difficulty jump might have been a metaphor for the story - I don’t know. But the game could still have given us a safety net.

Part of me wants to jokingly end this section by saying that: yes, it was too hard at times but maybe I’m just stupid now. The thing is, I do sort of have a chronic illness now (or a long-long covid recovery, same thing?). I know from speaking to friends and family that this sense of having a smaller brain is being felt by pretty much everyone after a full year of stress and isolation. So I think Maquette has a bit of an accessibility issue on its hands, albeit one that is easy to fix. You can always play the game with a clever person. Get yourself a sweet hero fiancé instead.

I think I enjoyed playing something with Michael more than I enjoyed the game itself, and the more time I spend on this review, the more I’m convinced of that fact. I loved the art of Maquette so much - supreme, bright and special - that I’m now using a screenshot as my desktop wallpaper. And even though the puzzles were sometimes convoluted, they were so satisfying to get right. I felt many moments of wonder. I felt like we were running around the inside of a Polly Pocket jewel ball, like the kind I had when I was a kid. But the story of the game was thin, uninspired; like a dust jacket on a hardback that could have been swapped out for anything else, I wasn’t attached at all. It was a shame that Maquette set up such a broad imagination of surreal proportions, dollhouses, vertigo and dreamscapes, and then tried to convince us it could all be activated with a portrait of a generic, flimsy couple. The pair had no fire inside them, no pearl around them, and I guess I wanted more.

We finished it on a Friday afternoon and immediately starting looking for other games to play together. I love that feeling after you finish a game, when the world around you feels less like the world it used to be and closer to the ideas the game spoke in. Soft overlap, new layer. There had been a maquette inside a maquette inside of another maquette inside of the game. Fanning out, shrinking down, exploding, invisible. It left me thinking about how I used to know a bigger world than this. I used to see oceans below me, disappear into tunnels, hike for better views, and fall asleep in my friends’ homes all around the planet.

Over the last year, I’ve tried to bring the outside world into mine: pictures on the walls, Zoom calls with friends, books, films, podcasts, new stories. Sometimes I sit back, zone out, and watch videos on YouTube of people walking slowly around places I’ve never been to so that I can remember what it feels like to move. It’s like I’ve been making my own maquette, and inside there’s only two people left: the two of us, tiny sand-sized people holding each other in the centre of a pearl. I’m glad the game reminded me of that little metaphor from the beginning of our relationship. It’s been calming to clear the table and put only the pearl on there, the smallest thing inside the small house of my mind. Iridescent, glowing, a magic careful thing. The world is nervous and hurting but I know that, whatever happens, for us ‘it’ll keep getting better.’