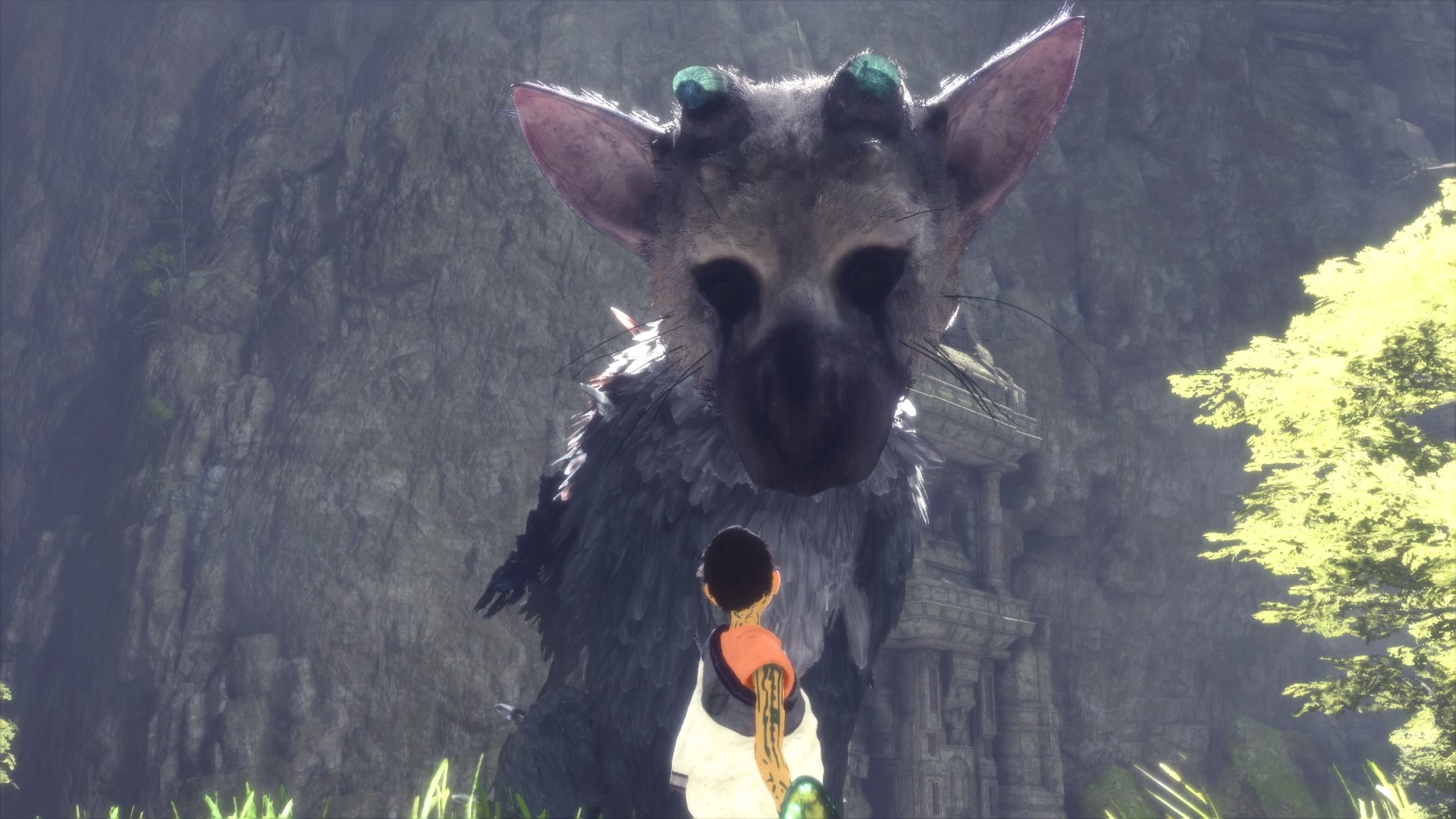 The White Pube · The Last Guardian

Throughout quarantine, I’ve mostly played still games. I don’t know what else to call them - but I’ve played like, all these still games inside my little star-sign crab shell, hiding safely from the outer world alone. Calm story-time things, there’s always lots of text to get through, strong balanced artwork, and narratives that branch but only closely, like plants that grow around themselves. There’ll be a few activities thrown in but it’s all in hand; you can stand there for a moment if you feel like it and the music will just play on. Once you’ve done the bits and bobs and turned all the pages, voila, the game is complete. I guess I’ve not thought about this as directly until now, but the pace of a game is an element I most definitely consider before choosing what to play next; like I wonder what will sync up best with my head in that moment, what I can handle. Over the past few months, I’ve steered clear of countdown platformers and games that hurry you along with a hand on your lower back, pushy. I could manage still games in my stillness where even though there are things to be getting on with, there’s never much of a rush. These games are calm places to be and never too big a commitment to see right through to the end; they unravel bit by bit and only when you’re ready, all in their own careful way.

But lockdown is lifting, a whole messy unravelling, and I can hear a knocking that is starting to break through the soft protective shell I’ve been so settled in. Big life is telling me it’s time to come out now - time to get used to work, to other people, to the weather as well. And it is all coming on at once: like I moved out, was reunited with the love of my life, and my day job began again all in the same fortnight. So, I can’t be still anymore, I’ve got to move; and with it, this shift has moved the culture-things I want to spend time with in a very obvious way. Basically, I am in the mood for some chaotic adventures. I, all of a sudden, want to fall into AAA odysseys. This is not even because I’m ready to bear the weight of them but because I think they’ll help dissolve the tiny perimeter I’ve been living and thinking in. Like, they might get me ready to be at the whims of schedules, a bitty social life, storms, content, and the long hungover second half of 2020 ahead of us all. It makes sense. It just also makes me laugh: I am like my own PE teacher surprising me, the class, with a bleep test. I’ve been so withdrawn and now my whole body needs to stretch. But in getting ready for everything to come, I can feel how I want some more elastic stories. More dimensions and drippy fiction. Feeling in the mood for games with wild settings, free roaming and climbing, magic parkour through space. It can be some motivation! I went to 8 countries last year but suddenly the 16 minute walk to Asda is something I have to psych myself up for. Some good adventure games might help me to emerge (like truth coming out of her well, but she’s putting her shoes on to do the third week of couch to 5K, god help me).

I got The Last Guardian for my birthday last month so I am starting with that. It is a 2016 game from GenDesign and SIE Japan Studio, designed and directed by Fumito Ueda. He’s known for two big classics, Ico (2001) and Shadow of the Colossus (2005), and while I haven’t played them, I am familiar enough to know The Last Guardian continues on from their style - and that it’s a style that might do the job. This story takes place on a stage way, way up in the air. It begins with a young boy waking up on the floor of a cave next to a giant creature chained to the ground, impaled with spears. It’s a hybrid animal. It has both fur and feathers, all grey; the loose body of a dog, wings, small broken turquoise horns, and a dark snout and eyes with black markings that give it the constant impression of being hurt, or sad like a clown. It’s not exactly cute, more, it needs looking after; it has this nervous energy for something so big and powerful. It seems pretty lost too. The boy, confused as to how he got there, just wants to go back home to his village and that means befriending the animal, Trico, so that they can maybe fly off these rocky cliffs - something he could never manage alone because he is a tiny, tiny boy.

Outside this starter cave is the single best architectural design I have seen across any game. It is a long and breezy mirage to lose yourself to. The cave is in the midst of a sky city of halls, arches, and cloud-reaching Babylonian columns that are ringed with spiral staircases. There are what look like watch towers that stand alone and out of reach, but again, they have these staircases for human-sized steps so there’s got to be a way in somehow. Moss covers half of these buildings, and the grass sort of glows and waves across the stone. Ivy climbs up the outer-walls and through the broken ceilings of empty rooms that are lit up under a misty airspace that is vast and bright. Some entire cliffsides are smoothed flat, but in a way that seems impossible because of their size… because who could have built them? Humans, creatures like Trico, or something else? And the walls are often carved with symbols from a hieroglyphic language familiar to their world but not ours. Between the buildings stacked up and next together on the rocks, there are these structures like the light outer frames of colossal buildings but with no centre to them at all - just thin lines that could be railway bridges except they are arranged in right angles, or leading to nowhere at all. And we can never see far enough down through the fog to see where these buildings even begin - we only ever get their tops, their shoulders. The wind flows through them all.

Trico and the boy have to make their way across this place together and they’re a moody, co-dependent duo. There are holes in some walls so small only the boy can crawl through them, and there might be a chain on the other side that pulls a gate open so once you drag that out, Trico can follow. Some cliffs might require climbing onto the creature’s back and holding onto his fur tightly so the two can fly clumsily to solid land, and so it goes: they have to stick together in this funny broken maze so that they can be free.

There is a lot I liked about The Last Guardian. The whole story of their adventure together is told in a flashback from the perspective of the old man the boy becomes, so you know from the beginning that he survives the homeward journey. His narrative voice is only heard on screen maybe less than ten times, so it’s very precise with its own drama, very contained. The screen isn’t covered with stats, maps, objectives or any of the HUD that often frames gameplay: you play it with bare hands and figure it all out as you go. And that gameplay is nicely ordered too - essentially its invisible level design is a series of escape rooms and I enjoyed figuring out how Trico and the boy could slip through, under, over or around these different buildings together. Puzzles between few moments of story in a sublime place, what could go wrong. Stained glass talismans to smash that Trico was too scared to pass; clusters of emperor butterflies along the way, as a treat. This game was giving me the high adventure I wanted, stretching my mind and showing me pure wonder… until it broke my heart in the most basic, shitty way.

We were so close. So, so close. But playing this game felt like being woken up from a good dream again and again because the controls were so bad - and specifically the controls for Trico. As the game progresses, you are able to climb onto the creatures back and ask him to jump up or pounce forward or do the various movements you need to keep the two of you moving across the land. But more than half the time, Trico just does not give two fucks about what you are asking him to do. It’s like you input a command and the game receives it and does nothing, and you can press the same buttons thirty times and maybe on the final attempt he will do whatever it is you need to happen in order to keep playing but at that point you’ve already lost the will. No pattern to getting it to work, no trick. Pretty early on I went to google ‘The Last Guardian controls’ because I thought I had them all wrong and the autofill was ‘The Last Guardian controls are terrible.’ In a way, I’m glad it was not just me. But it broke me out of the game’s cohesive fiction, like trying to read a book and realising quite a lot of the pages are stuck together and the words lift off in pieces when you finally manage to pull the pages free. On one level, you have to get Trico to dive under water and through a tunnel while you’re holding onto his fur. What should have taken thirty seconds took 20 minutes.

The sticky controls boxed me in, made me stuck and made me STILL in a game that should have been flowing. I’ll only remember this game as the one that made me shout out loud alone in my living room from total despair. There are a few baddies that you have to avoid along the way, some glowing blue soldiers that, rather than pull a sword on you or any usual combat, bear hug you from behind with giant arms so that you can’t move. The boy is tiny so his arms are trapped then and his feet are off the floor, and the only way to get out of the soldier’s hold is to mash the buttons so that you eventually squirm free. That in itself is maddening, and it makes me think the poor Trico controls are a conspiracy - that there is an evil in this game that wants to drive players mad. Well you WON Fumito Ueda. Enjoy the money I hope it makes you happy. Dear lord, what a sad little life, Fumito. You ruined my night completely so you could have the money and I hope now you can spend it on lessons in grace and decorum. Because you have all the grace of a reversing dump truck without any tyres on. I am joking, but it does not make me want to play his other games, and Shadow of the Colossus is the game I am recommended most often by our nice readers. You’re all going to have to convince me it’s better than this, or at least worth the struggle because, honestly, never again. Save yourself, I’ve warned you. And Fumito, if you are reading, that’s a quote from Come Dine With Me and I hope your next game is less cursed.