Breasts and Eggs is a book by Mieko Kawakami. It has 2 halves.

FIRST HALF: Breasts Natsuko is a 30 year old writer living in Tokyo. Her older sister, Makiko, and Makiko’s 12 year old daughter, Midoriko, come to visit her from Osaka. Makiko is an ageing hostess; feeling the loss of beauty that is implied with age, and its impact on her employability, she is obsessed with the idea of a boob job. Midoriko is anxious and silent, only communicating by writing little notes. Over the course of their short visit to Tokyo, we hear Midoriko’s inner thoughts through dislocated journal entries. They punctuate Natsuko’s smooth narration; they are naive, disgusted, in denial and horror at the way bodies are affected by puberty. Midoriko is the most philosophically interesting fictional character I have ever met. She loves her mother, but finds her existence painful, pitiable, infuriating. She loves her mother, but she never wants to be like her, hates her a little bit for being the way she is. Midoriko is angry, frustrated, a caged animal howling for release; but I still can’t quite put my finger on what the specific limits around her are made of. It is womanhood in the way she is beginning to experience it: periods, the possibility of a specific body, the horror of intimacy, Men, being broke and young and scared of the future, scared of change, and kind of alone in the way she is going through this all. I love Midoriko because I agree with her; I am still scared by my body, the possibilities of how it is perceived, the experiences it could or can be subject to.

SECOND HALF: Eggs 10 years later, Natsuko is writing her second book. She’s spinning her wheels on it, still reeling from the change her life has undergone since the success of her first book: she has money, space and time to write, clarity and comfort that comes with age. We follow her as she chews through the possibility of having a child through artificial insemination. What does having a child mean, morally, ethically? Can she do it on her own without that insular pocket of a normative relationship? What right does she have to just summon life into existence, pay for a real living person to pop up out of her? This half of the book is longer and slower; it takes its time deliberately, so it can cover all the angles. Women that are divorced, unhappily married, single and of the belief that having a child makes you susceptible to ‘middle class values’: these are full characters, but they are heavy and representative. They play their role in relation to Natsuko and the narrative, but they are a kind of passive backdrop too.

That second half of the book feels like an articulation of concerns I am not old enough to viscerally understand on my own terms. Where the first half tightly winds itself into the way women relate to each other across generations, the second half is so concerned with reproduction and everything it implies. I thought the first half was perfect, but I think in 30 years, I will think the second half is perfect too. It’s like a little snack I am saving for later, its legs trail off into my future, for posterity. And ahhh, what a rare kind of psychic fiction! A story that you can predict your relationship to!

Maybe sometimes being in a body that is briskly filed away as -WOMAN- is painful; there isn’t an immediate or visible escape button you can hit that would just pause the discrete attrition of being perceived as a woman. How do you write about cis womanhood without reducing bodies to a mystical essence of their constituent parts? Maybe, those mystical constituent parts become sites of aggression, maybe you terraform them, maybe they expand and become mechanisms for alienation. Maybe breasts become a vehicle to talk about work and poverty: Makiko’s desire to be beautiful is also a desire to make more money. Working at the hostess bar in downtown Osaka, breast implants become a way to perform work more efficiently, or exist under capitalism more seamlessly.

Maybe breasts become insular objects. You can contemplate them impartially, distance yourself like they’re not actually attached to your living breathing body.

Maybe breasts become an existential trip; an object of nausea and alienation, the limit where a body diverges into the unpredictable, or the touchpoint for a stifling feeling of being contained in an unfamiliar body. ‘I remember what it felt like when my breasts started getting bigger. How out of nowhere I had grown these things… As a kid, whenever I saw the naked women in the magazines that the kids in the neighbourhood got their hands on, I guess on some level I thought that someday all those parts of me would fill out too, and I would have a body just like them. Except that never happened. My monolithic expectation of what a woman’s body was supposed to look like had no bearing on what actually happened to my body. The two things were wholly unrelated. I never became the woman I imagined.’

Maybe Breasts and Eggs is a kind of social novel; at times narrative spins in a tight circle. I don’t know what specifically constitutes a social novel, but it fits my idea of what it could be: depicting how a social or political landscape plays out through the tightly wound drama and the narrative collisions. An interaction isn’t just an interaction, it is also descriptive of conditions in A Society, and how those conditions affect the people that exist under them. But it’s not as heavy-handed as it sounds, not as blunt as some of the Victorian stuff. The politic of it is grounded, but it never slips out of fictional sensitivity; it is demonstrative AND beautiful.

In a bathhouse, Natsuko encounters her childhood friend, Yamagu. She doesn’t recognise her at first, gets confused about whether Yamagu is a man in the women’s section by accident. It nearly made me clench, but then it dissolved into hallucination: ‘Yamagu looked at me in silence. I tried saying, “Since when were you a man? I had no idea,” but she didn’t answer, just flexed her muscles. Then the bulging flesh sheared off, coming free like a hunk of dough, which morphed before my eyes into a bunch of tiny people. They ran over the water, skating across the tiles, whooping their way up and down the naked bodies of the bathers… I caught a stray homunculus by the neck and tickled him. I told him that he shouldn’t be there. This bath was for women. But the rest of them cried out “THERE’S NO SUCH THING AS WOMEN” and squirmed their little bodies. They sang those words over and over. They didn’t care… “THIS IS IMPORTANT,” one of the homunculi said to me. “THERE ARE NO MEN AND NO WOMEN AND NOTHING ELSE.”’

There are moments of prose where reality just dissolves, and narrative is superseded by a kind of imagining that feels aching and wet. The scene in the bathhouse, and again when Natsuko and Midoriko get in a ferris wheel at sunset. In ‘the blue of evening’ time and the city around them are paused. They rise up slowly and Natsuko unfurls: the past and memory and the way it all implicates the present. All in front of the city at night, from way way up, safe against the sky. These are not quite dream sequences. They are parallel stories that slip into the story we’re being told. They are little pockets where reality, as it’s being built, is suspended. They are exits.

At points in this book, I think womanhood opens up as an implied state. It’s not about being in possession of literal breasts and eggs, not about chromosomes, collective experience of pain or trauma. I think it is about being able to vacate yourself, and lay your body across the space in between - that interconnective tissue between yourself and Another. Mieko Kawakami isn’t particularly interested in Woman as a possessor of romantic mystical power, the miracle of birth, giving Life(!!!) In the second half of the book, Natsuko speaks about wanting to meet her child, almost like she is a passive agent in its entry into the world. She is only the doorway, the facilitator. Women are a kind of portal, a synapse.

I have been tearing my way through books and books and books in lockdown, because being able to spend time in another reality for a little bit is a soothing kinda escapism. Like a tourist, I have found joy in suspending my disbelief and floating through fiction on my way. I don’t think I have enjoyed a book as much as this since I read Middlemarch. I loved Middlemarch because of its completeness; it presented me with a world that was so full and whole, that I couldn’t help but plunge in neck deep. Breasts and Eggs did kinda the same, but more. It was a fictional play space where things I am close to, that wound me sometimes, could unravel out at a distance. It could be beautiful and poetic, rather than a wound. It felt more active than just ~fiction as a happy pocket taking you Elsewhere~, more unstable, heavy. It felt like tiny perfect machinery, immaculately crafted and choreographed. It made me feel like imagining wasn’t just a detour, but rather a process of revelation; like working through the feelings and narrative in another reality was a way to understand the more opaque parts of this reality. 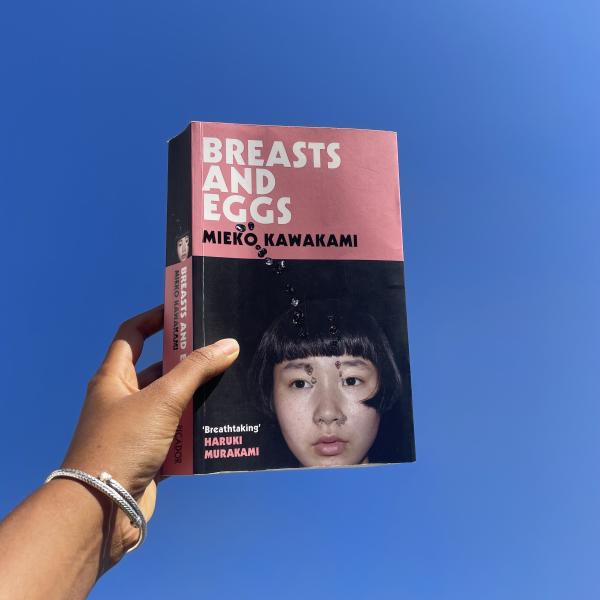